skip to main | skip to sidebar

The Bird Hoverer, and Actual Air 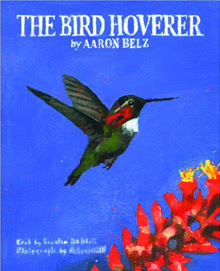 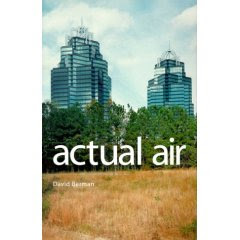 A handful of books have kept me company since my tenure on the living room couch began two-and-half weeks ago (with the fall that broke my tailbone). Of those books, two have had an especially medicinal effect on me.

The Bird Hoverer, by Aaron Belz, and Actual Air, by David Berman, are two collections of poetry that should reward even the most tentative reader, which, thanks to my miniscule pain threshold and the dizzying effects of hydrocodone, I've been lately.

Belz, a graduate of Covenant College and NYU's creative writing program, and Berman, who's best known as the frontman of Silver Jews, have some important things in common. Both poets write with an an attractive, easy-going tone that can alternate between commonplace situations and absurd flights of imagination without needing to make an apology. Their poems are consistently witty, humorous, and full of exciting surprises. Both poets, in their own ways, have the power to make me forget, if only for a minute or two, that my reality now consists of an extended sentence of solitary confinement, and a broken butt.

Here's a sample from each book (the first is from Actual Air, the second from the Bird Hoverer):

A second New York is being built
a little west of the old one.
Why another, no one asks,
just build it, and they do.

The city is closed off
to all but the work crews
who claim it's a perfect mirror image.

Truthfully, each man works on the replica
of the apartment building he lives in,
adding new touches,
like cologne dispensers, rock gardens,
and doorknobs marked for the grand hotels.

Improvements here and there, done secretly
and off the books. None of the supervisors
notice or mind. Everyone's in a wonderful mood,
joking, taking walks through the still streets
that the single reporter allowed inside has described as:

"unleavened with reminders of the old city's complicated past,
but giving off some blue perfume of the early years on earth."

The men grow to love the peaceful town.
It becomes more difficult to return home at night,

which sets the wives to worrying.
The yellow soups are cold, the sunsets quick.

The men take long breaks on the fire escapes,
waving across the quiet spaces to other workers
meditating on their perches.

The sky fills with charred clouds.
Toolbelts rattle in the rising wind.

A foreman stands in the avenue
pointing binoculars at a massive gray mark
moving towards us in the eastern sky.

Several voices, What, What is it?

Pigeons, he yells through the wind.

Having spent the better part of the morning
among birds, having heard
what they whisper
to each other as the sun comes up,

having noted how they name their offspring,
with names like Fuzz Packet and Mr. Charming,
Devily Doo and The Potato Famine Boy,

having observed, if momentarily,
as they begin to glide, their haughty eyes
and knife-like toes,
I hereby reject birds
and not only birds but
the places where they dwell, the patterns
of their lives, the very cosmic instinct
that brings them into being--in fact, the skies;

having been raised by birds and
having nursed at their impossible teats
and been subjected to their whimsical
sarcasm, also having been approached by
them on several occassions--

when my star had risen and theirs perhaps had not--

in the name of
neighborliness or good citizenship and having
politely asked them to step off,
can't you see
I'm busy, type of thing, and having quietly
informed them that I no longer belong
to their so-called tribe,
I hereby request
that they wipe the silly smirks off their faces
and find other people to circle, other places
to drop their glob-like feces, and that is all
I ask of them, not that we can't exist on the same
planet, free-thinking individuals,
in equal
if seperate and clearly demarcated communities.
Posted by Kiko and/or Vincent at 10:47 AM

This is a Flickr badge showing public photos from Kikobiko. Make your own badge here.